Dear People of All Hallows,

In Luke’s Acts of the Apostles, Peter prays on a rooftop at the sixth hour of the day, when God grants him a vision which, if followed, would overturn everything that Peter had believed to that point.  God was apparently telling Peter to reach out with Christ’s love to all people, regardless of their ethnicity or culture.  This vision would lead Peter to the home of Cornelius the Gentile Centurion, and Peter would end up baptizing Cornelius and his entire household that day.  The vision would eventually lead the early church, through the testimony of Peter, Paul, and Barnabus, among others, to embrace gentile converts as full members in the Christian movement.  And the rest, as they say, is history.

Today you and I are faced with a similar need to discern God’s will in the midst of confusing times.  For us it is the sixth hour of the day, and we are on the rooftop praying.  That’s what these past months have been for us, as we gather around our screens each day to pray together.  We have been reading God’s word and praying, waiting patiently for God to reveal the right path for our parish.  We have been ejected from our beautiful buildings by the tiniest of God’s creatures, and yet, we are still the church just as we were before.  We were never just the buildings.  Just as in Peter and Paul’s day, the church today is still a people, not a building or an institution.  We are the people of God, and we are gathered in the name of Jesus Christ wondering what in the world we are supposed to do now, now that the world as we know it has shifted so surprisingly and so concretely.

Our stewardship committee has chosen this year’s theme to be, “Bridge over Troubled Water.”  I think it is inspired, no less so when one considers that Paul Simon saw his song as being about Jesus Christ, having based his lyrics on an earlier Gospel song.  The idea of our church moving away from its identity as being rooted in buildings made of brick to that of being a bridge made of loving people may be just what our world needs today.

It reminds me of a news story from London some years ago, in which a man wanted to end his life by jumping from a bridge, but he was gently and lovingly talked down from doing so by absolute strangers, who proceeded to hold onto him for an hour until help arrived to get him down safely.  It was a selfless act of care, compassion, and selflessness shown by complete strangers for a poor, hurting human being.  In that hour on that bridge, those people became a bridge over troubled water for that poor, troubled man.

This is what we at All Hallows must strive to be in the coming year: a bridge over troubled water for hurting human beings.  Together we can bridge gaps that are causing such pain, doing so through the same care, compassion and selflessness that our Lord showed for us in becoming the bridge between heaven and earth.  It will take all of us working together—our time, talent, and resources—but it is what the world needs now.

I hope that you will continue to support our parish family in the coming year as we seek to be a bridge of God’s grace and mercy in a world that desperately needs such gifts.

May God bless us as we strive to do God’s will, ever, 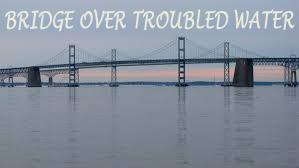 WE ARE PROUD TO BE A PART OF